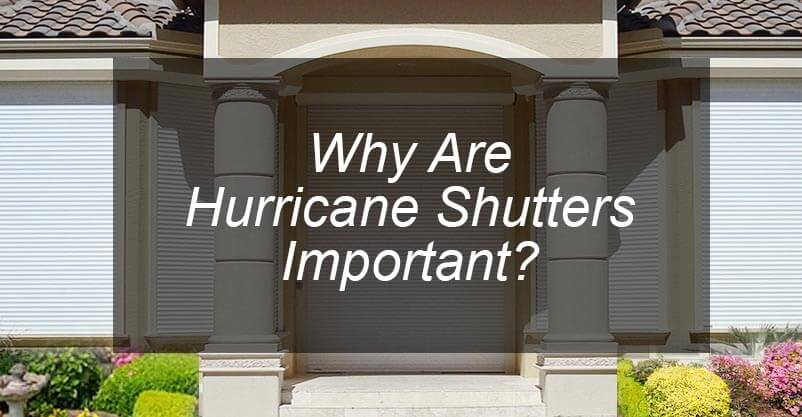 In 2018, Hurricane Michael threw cars, homes and other enormous objects into the canals around Mexico Beach, FL. Like something out of a Hollywood movie, the Category 5 storm caused unprecedented devastation with maximum sustained winds of 161 miles per hour.

In the Tampa Bay region, officers, enlisted service people and staff at MacDill Air Force Base worried for their counterparts at Tyndall Air Force Base, where Hurricane Michael made landfall. Not since Hurricane Andrew in 1992, had a Category 5 hurricane made landfall in the U.S. It wasn’t long before the images of destroyed homes began to pour out of the region.

Hurricane shutters, while not a guarantee of safety, provide much more protection than temporary solutions. When Florida storms launch rocks, signposts, downed tree limbs and other heavy projectiles into the air, metal shutters covering your windows and doors will keep you much safer than using pieces of plywood.

Storm Shutters Also Protect Against the Raw Force of Nature

Flying debris is not the only danger in a hurricane. Their pure force is enough to break windows and rip doors off hinges. During a storm surge, hurricane force winds push sea water toward the shore with such intensity that it disrupts the circulation on the ocean floor. Experts at the National Hurricane Center say the water can no longer follow its natural flow down, instead is forced up and out – moving farther and farther inland. How far inland? In 2018 the storm surge of Hurricane Michael reached as far away as Marianna, FL – 50 miles away from the coast. How damaging can water be? Consider that a cubic foot of water weighs approximately 60 pounds. When propelled by strong winds, that wall of water can be fatal to anyone in its path.

Winds in a hurricane vary. Hurricane wind speeds range from 74 mph to over 160 mph. Even at their slowest speed, hurricane force winds are strong enough to tear out windows, turning the inside of your home into a minefield of broken glass. Hurricane shutters help prevent that by absorbing a hit and blocking those forces from penetrating the structure. Hurricane force winds that make it inside a single window or door can change the air pressure inside your home and put the entire structure at risk of catastrophic damage.

Hurricane Shutters Can Be Deployed Quickly

There’s nothing more unpredictable than the weather. Even the most closely watched storm can change course and head straight into warm water conditions that make it stronger than expected. When time is of the essence, you may not have the hours it takes to nail plywood panels over all the openings of your home. Most evacuation orders give a very limited window of time.

Hurricane shutters that are easily deployable come in a variety of styles. A single remote control can close 20 rolling shutters in mere minutes. Those are additional minutes you can spend gathering your supplies and moving your family to safety.

In the face of heavy winds and surging tides, experts say that rigid materials don’t always last through the storm. In these cases, strong gusts can rip them from screws and foundations, too. The inflexible object is transformed into dangerous projectile.

Accordion hurricane shutters are made of aluminum to combat this problem. In the face of heavy winds, accordion style shutters flex and move while maintaining their structural integrity.

Hurricane Shutters Are an Added Layer of Home Security

After a hurricane or storm has passed, law enforcement agencies warn there are always opportunists who use this time to rob and loot homes before residents return to the homes they evacuated. Hurricane shutters protect you in these situations as well. Whether you evacuated to safety or stayed put, hurricane shutters will make criminals think twice about breaking into your home.

Find All Types of Hurricane Shutters at Home Safety Solutions

From decorative, protective colonial shutters to more heavy-duty hurricane shutters, Home Safety Solutions in Tampa Bay, Florida, has a wide range of product lines to protect your home during Florida storm season. To find storm shutters that meet your budget and needs, contact us today for a quote

Fill out our quick form to request a call.